Hey everyone, We are back from Thailand and have already ventured North to Queensland. We chose to stop in some beautiful places on the way and were forced to stay in others due to the heavy rain and flooding. I also managed to get a long awaited tattoo for myself from a good friend and mentor.

Below I’ll sum up the Thailand trip and open up bookings for the second half of May in Sydney.

The Past – The Sak Yant Festival Thailand.

We made our way to Wat Bang Phra, 2 hours out of Bangkok. This is a temple famous for its magical Yantra tattooing. It was a brief visit comparatively to other pilgrimages I have made and most of my time was spent in silence watching one particular monk work. This was in part because of the language barrier but I have always learnt the most through observation. One of my teachers described this method of learning/teaching as the young eagle watching the old eagle, it is what I have always done.

I gained the most insight from the first Ahjarn (master) I came across, who’s name I will never know. We explored the entire temple grounds and watched numerous other monks and Ahjarns. I was back at the beginning of my circuit rather quickly when I realised non of the other groups within the temple had the same energy as the first. They simply were not doing the work in the same way. In fact they seemed worlds apart.

The first room had a stillness. This immediately conveyed the respect of the people who filled it. The monk was working in a small space, his seat a modest raised platform maybe 20cm high with a fan above him. The room half full of silent on lookers waiting their turn to receive. I took a seat one person back from where he was “working” and had an uninterrupted view. He was a happy man, and throughout each sitting he had with someone he would make humorous conversation frequently enough that it was never awkward for the person receiving the tattoo or for the youths who were assisting him by stretching the skin.

His tattooing approach was very thorough he would hear the request, ponder very seriously, ask some questions, make some jokes, then proceed to mark out a grid like stencil using a stick and an ink pad onto the skin. His concentration was high, he was very careful and balanced in his preparation before starting. Then he tattooed the Yantra directly onto the skin, guided only by the grid. After the tattoo was done he placed his hands on the receivers shoulders closed his eyes, said a mantra softly to himself before steadily blowing directly onto the tattooed area and head. This seemed to activate the tattoo and the effect was instant for some people. They were energetically being moved to yell or cry while others were simply grateful in the ahjarns presence, receiving a subtler yet surely just as powerful experience.

While I was impressed by the particular work I witnessed in the first room, in many of the other rooms or circles I was not. Monks whom to me seemed to have zero care for the work they carried out were plentiful. After spending only a few hours at Wat Bang Phra I was able to watch a hand full of different tattoos and blessing from start to finish, which satisfied me enough to draw conclusions and correlations in my own work.

On the surface the difference between Sak Yant and my own work is obvious. However energetically they have very similar forces at work. The main force is of course intention. This comes from two different parties the person receiving the marking (client) and person giving (artist). If the artist has a focused intention for the tattoo and the client does not, the full energy being given will not be received. If the client has a focus intention and the artist does not, they will still receive energetically but not necessarily to the same capacity. A tattoo is most effective when both the person giving and receiving are clear on the intention and allow the shift to take place. There is also the learning of different bodies of knowledge that will aid the artist in their capacity to manipulate and transfer this energy. This knowledge will vary greatly between artists depending on their personal beliefs.

This energy exchange is true of all tattoos in all places and by all people.

The Present – On The Road, Queensland.

We are currently in our troopy on our way up the east cost. We will be visiting our friends at arts elemental to catch up and have a chat about all things good. We will have more information on that power house next month.

My experience getting tattooed.

10 years ago I started getting tattooed at Tatudharma in Sydney, and last week we finished what was started in that studio. Both my sleeves are now done. The journey ended in a humble little studio in Lennox Head, the Rock of Ages. This space is co-owned by Tatudharma’s previous owner Joshua Roelink. Josh started tattooing me after I contacted him for an apprenticeship. In response he told me he didn’t have the time or space to be able to commit to an apprentice but if I wanted to get tattooed he would put me ahead of the waiting list and offer advice and answers to any of my questions. The time spent in that studio was some of the most influential in my tattoo career and opened the door for the most crucial part of my technical tattoo development spent at at lighthouse tattoo. So thanks Josh, I truly appreciate the time and effort and I’m really happy with my sleeves. 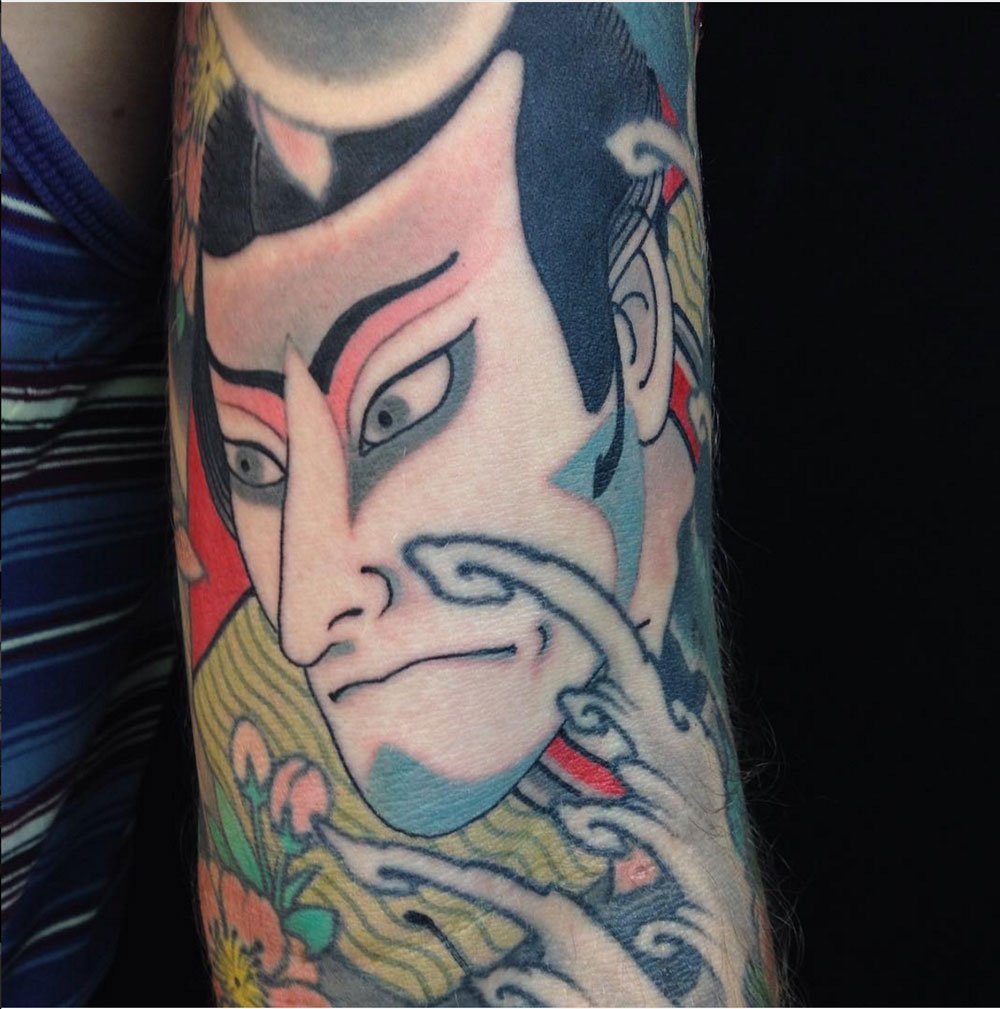 The Future – Bookings for May/June

We are aiming to be back in Sydney at the end of May / start of June and I will be doing a short block of work.
For those who are interested in getting some work done please fill out a form and submit your request. Even if you have filled out a form previously please submit a fresh one.

I will be prioritising work that is on going. Also tattoos with strong intentions and those of a therapeutic nature. Remember tattooing is a tool for transformation and growth. It is not just aesthetic.

Looking forward to reading your requests.

This piece was started in Sydney last year. Jarred waited around 6 months before flying from Brisbane to get tattooed. We did 2 sessions at lighthouse within a month and then managed to finish it off recently on the road. The tattoo has a strong meaning for Jarred with connections to his father and I’m sure he won’t mind me saying that it was a very emotionally charged piece. Thanks mate.